Today’s #TipTuesday is a detour from my recent SmartList tips for Dynamics GP, and I’m going back to Excel for this one.

I have been working on a project recently where some data validation is needed to ensure that user-entered data on some forms is valid. I want to have some visual validation for Accounting when reviewing these forms prior to uploading the data into Dynamics GP to determine in advance if the G/L Accounts exist, or if the Job/Project and/or Cost Code/Category exists. In my use-case, I can’t use the built-in Data Validation features as the lists would be too lengthy to be manageable, so the fields are simple text fields, prone to errors and typos.

I want an easy way to highlight invalid entries before proceeding further in the process, during the review stage. Specifically, I want to use Conditional Formatting to highlight anything that can be validated if it isn’t in various lists (of accounts, jobs, cost codes etc.).

For some reason, these types of queries in Excel give me a headache. Every time I run into this situation, I try a slightly different method and it always seems so convoluted. Historically I tend to go to VLOOKUP but it’s clunky (the way I’ve done it in the past). I end up with some IF and VLOOKUP or MATCH god-awful looking formula that’s hard to troubleshoot.

Today I had an “aha!” moment. I learned a new way to do this and it’s SO MUCH CLEANER! The simple tip is using COUNTIF to determine how many times a given value appears in a list. If it appears 0 times, it’s “missing” and needs to be highlighted or flagged. If it appears 1 or more times, it’s in the list.

I could be the last person on the planet to think of this but honestly, it’s changed how I think about validation. (To be clear, I use conditional formatting all the time but I didn’t think of simply using COUNTIF to validate the existing of a value before… )

How to use this with Conditional Formatting

Conditional Formatting is a very powerful feature in Excel but is often intimidating to end users. It’s not always intuitive to set up if you need to do something outside of the canned examples (shown below). 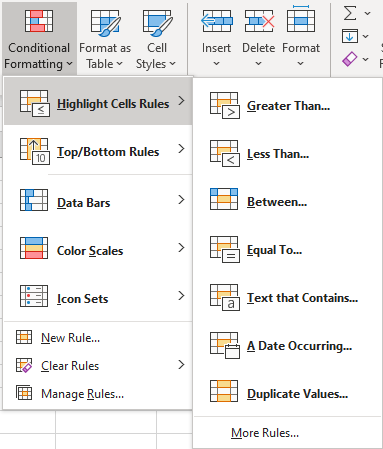 In this example, I skipped the defaults and went into More Rules and the “Use a formula to determine which cells to format” option. Before I show you that, here is what my spreadsheet example looks like. It’s a Fabrikam Ltd. chart of accounts (Dynamics GP sample company) and off to the right is an example of two G/L Accounts, one valid, one not valid. 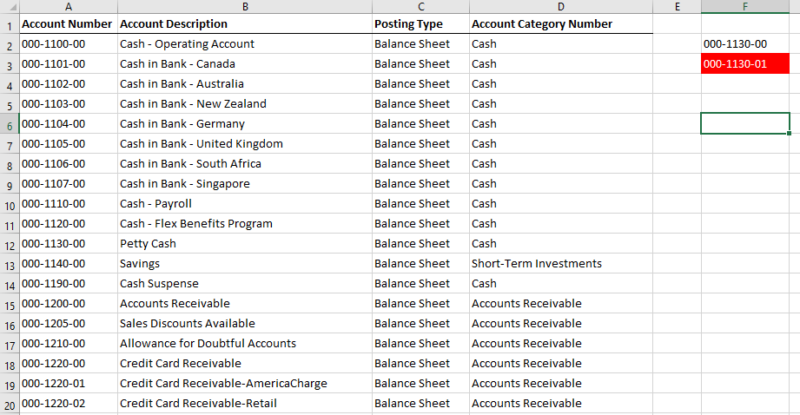 This example is simplistic, but in reality, I had a separate tab with a user-filled-out expense form and the conditional formatting is applied to any column where there was a G/L Account entry option. In my example above, I simply want to check 2 accounts, in cells F2 and F3. I highlighted them, then went into Conditional Formatting > Highlight Cells Rules > More Rules > Use a formula to determine which cells to format.

My formula is the COUNTIF formula I mention above. Here is where the syntax is weird in conditional formatting. I always read these as if the first equals sign isn’t there, because it looks weird right?

Two equals signs in a formula? Yeah… I agree. But, ignoring the first one makes the rest make more sense. Here’s how to read the formula and most importantly, how to get the absolute references correct so you get the results you want. 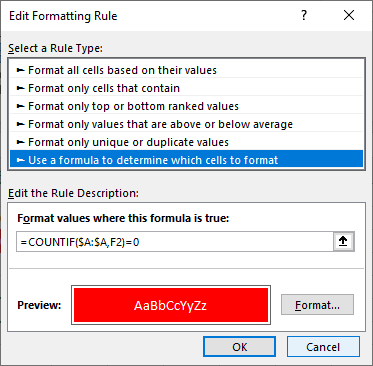 Once I click OK (after setting my desired formatting), I am returned to this window below. This is where I tell Excel what cells this rule applies to.

Because F2 and F3 were highlighted when I clicked on conditional formatting in the first place, it applies to those 2 cells.

What’s beautiful about this approach is it’s much simpler to wrap my head around. If I use VLOOKUP or MATCH, I also need an IF and more than likely a wrapped like IFNA or IFERROR to catch the inevitable error when the thing I’m looking up is, in fact, not in the list in the first place. The formula becomes long and unwieldy.

I can’t believe I didn’t know about this tip before but I now know I’ll never forget it!