If you haven’t heard the expression “GP Next”, it’s a long-time moniker for the next “yet-to-be-named” release of Microsoft Dynamics GP. It’s a commonly used term to talk about the next version while product versioning and/or naming and/or branding details are still being sorted out, instead of referring to it by a semi-real name that changes at the last minute. It’s not like the product team picks a name and then starts working on a feature list! Hence, the short form GP “Next”.

Why am I bothering to talk about that at all? There is often confusion on forums when users see this referenced and sometimes they think that is actually the name of the next version when it’s simply a placeholder. Trust me, in the world of everyone seemingly falling over themselves to get their product in the cloud, we want people talking about “GP Next” for a long time! At least, I do! This is a great product with a deep, passionate community of users, partners and ISV vendors. As long as we’re talking about what might be in “GP Next”, that’s a good thing in my humble opinion.

Early this morning, Terry Heley published an article on the GP Product Team’s blog - about the “new name” and the schedule for the New Feature blog series. This was shared at the GP Tech Conference earlier this month but was also disclosed as “please do not share yet”. I alluded to “something” being NDA in my recap post of that first day, and this was what I was referring to.

What is the next version called?

Well, as the Microsoft product team blog states, the version number is no longer part of the name and the product will now be referred to like the other products in the “family”: Microsoft Dynamics GP. The next release is referred to as the “October 2019” release. There will be a “December 2019” release when the tax updates come out, and a “June 2020” release when the next tax updates come out, etc. Each version will still have build numbers and such, they always do, but the product name will now simply be “Microsoft Dynamics GP”.

Also from the blog: the link for the newest version of the Dynamics GP software lifecycle policy. The “modern policy” follows what the other products’ policies are, to bring Dynamics GP in line with the other products. The new policy defines “current” as being on one of the three annual planned releases. Anyone on releases prior to this October 2019 release are governed by the previous timelines, referred to as the “Fixed Policy”.

To be able to upgrade to the next year’s updates, you need to be “current” and the page I link to above states that very clearly. More general information about the “Modern Lifecycle” policy can be found here.

Here’s a snapshot of the years and timing for Dynamics GP (October 2019 release and beyond), through 2024. 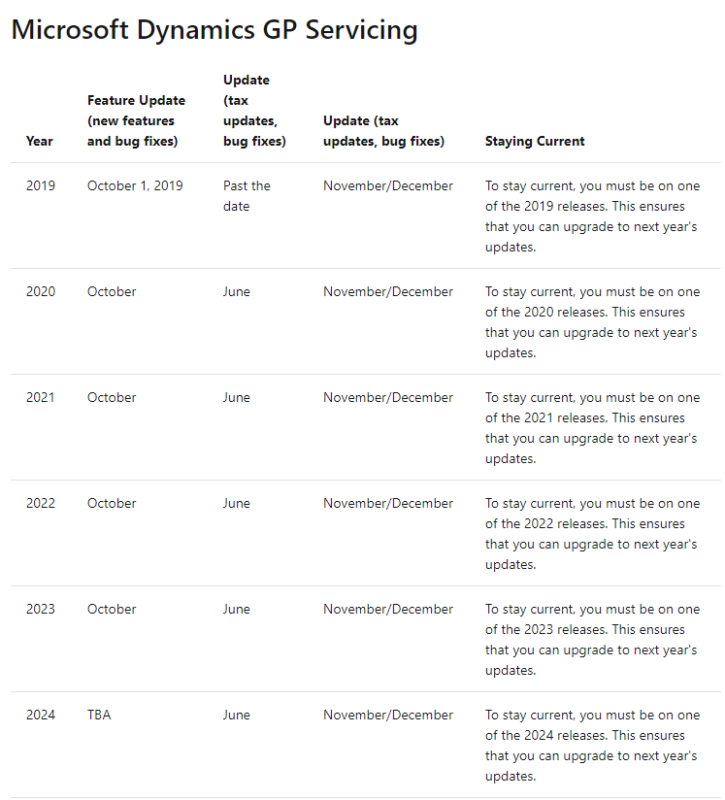 There are two reasons why I like this change. One is quite simply that moving the policy to align with other products underneath the Microsoft Dynamics 365 umbrella (and Power Platform) is a sign of life. We in the Dynamics GP community are all about the “signs” that are negative, and I’m not going to post those things here (we’ve all seen them), but we rarely make the same big deal out of the positive signs that it’s not going anywhere. Which reminds me, I saw a great sign in store once: “If you’re waiting for a sign, this is it!”. 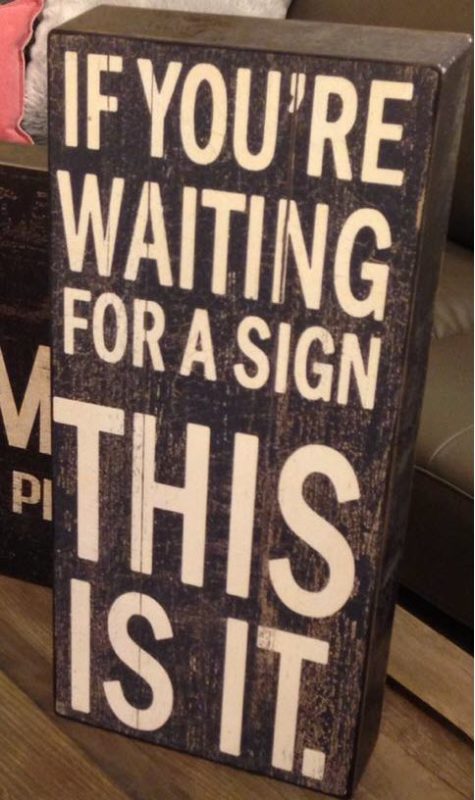 The bigger reason I like this is I feel it will be a lot easier for clients to stay current once they get to this release or something newer. I believe that the days of “major” releases and big upgrades are gone, once you get here. Look at the terminology used in the blog (and screenshot above):

Feature updates may contain lots of new things but they likely will not be as major as a full major version change, which means they may not require the same investment in consulting time or testing time to roll out. Those costs are often the barrier to keeping current with Dynamics GP. Previous “feature updates” are any version of GP that was an R2 or R3 release - something I lovingly refer to as a “big-ass service pack” LOL… but I digress!

Once a customer gets on the October 2019 release or newer, it’s a much easier “sell” (for lack of a better word) to simply plan for annual updates to keep current and keep supported. (Not to mention getting the latest and greatest closer to when it happens). If you are a payroll client, you have no choice but anyone else who has the option, for you I say this is your chance to get current and stay current a bit easier than before.

With cloud products, users don’t have a choice: when there’s a new release, you get it whether you like it or not. With on-prem products, users get a choice but it’s still in their best interest to keep relatively close to the current release as that guarantees having a supported version to use in their business. The longer you go without upgrading, the more likely it is to find there are fewer and fewer people that can help you maintain your very-out-of-date Dynamics GP install plus the cost to get you current involves multiple “hops” to get there. Cha-ching.

Will “no product number” cause confusion?