Well, it’s that time of year again, and time to look back at 2018 and plan for the new year. This is the 9th year where I’ve been writing these resolution posts and it’s always fun to look back at what I thought the last year would bring.

If I could describe 2018 in one word or phrase, it would be “emotional roller-coaster”. This year had more ups and downs that I’ve had in a long while. My life is fairly simple overall and I don’t tend to vary emotionally much (I don’t think) but 2018 reminded me that no one is immune to things affecting your mental health, no matter how strong a person you are otherwise.

Some of the highlights from 2018 for me were:

On a personal note, my partner and I had a vacation out west in and around Canmore, Alberta and it was fantastic. One of my favourite pics is from a round of golf at Banff Springs, an amazing course to play! I ended up getting this pic framed and it’s sitting in my basement along with a pic from last summer’s trip out east. 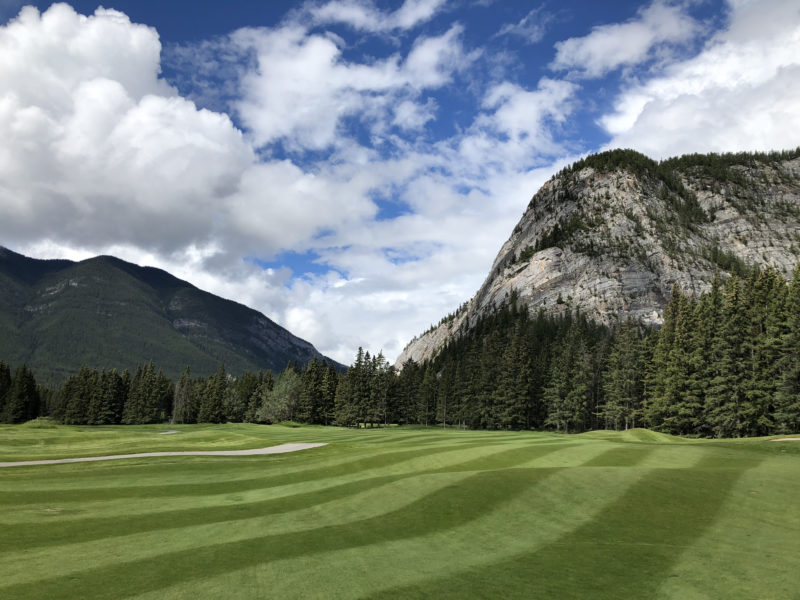 Banff Springs 18th hole, view back towards the tee boxes

This was a success, as I did receive my renewal in July 2018. However, there was quite the “culling” of the herd, so to speak, and a number of friends and colleagues lost their MVP status, not getting renewed. Our GP MVP list dropped significantly, going from 15 to 10, technically 9 but I count Belinda as a “GP” MVP even though her award category isn’t Business Applications any longer. That was bittersweet, but I was thrilled to get my first renewal, as it was my first time through the process.

I would consider this a success as well, having written far more blog posts than I have ever written in the past. I count 86 blog posts in 2018, and only 2 of those I would consider “non-business” posts. I started a weekly series called #TipTuesday and was pleased with my ability to keep that up all year long. I skipped last week and today due to the holidays but I would like to try to continue that this year.

This was an epic fail. I read a TON of books in 2018, over 36 books (I’m well into #37 but it will not be finished by the time 2018 ends!). However, not a single one of those was for business, or even non-fiction. I struggle to keep up with even my CGA/CPA magazines, they pile up and sit in a corner for months.

This one was a success but also kind of cheating! At this point last year, I was well underway in negotiations on the new position I started last January. It wasn’t a sure thing by any stretch, so I hadn’t mentioned it in last year’s post but I knew some website changes were inevitable. I had already converted my blog over to this domain but hadn’t yet cleaned up the old kuntzconsulting.ca site. I’ve now done that and it’s a simple one-page site that simply tells people that business is no longer operating!

The start of 2018 was a tipping point, as I was working through the details on the new job and didn’t know for sure which way it would go. Mentally I was ready for a change, even though I loved consulting. Starting the new position was great, and it was nice to get that out of the way early in the year but I didn’t anticipate what the impact would be on the winding down of the business I had. That was a little bittersweet as I had really wanted to get to the 10 year mark (I finished 9 years…). I have no regrets though, making the change was still the right move for me in the end.

I’ve been winding this down for months and at this point I’m just waiting on a confirmation of one thing from the Canada Revenue Agency before I can actually dissolve the corporation. So, it’s not exactly a tough goal but it will be a significant milestone in the year to finally see the business officially done. I thought I might get into some consulting on the side but realize when I get home from work, I’m done, I am not interested in evening & weekend work at this stage in my life.

This will now be an annual goal as long as I’m an MVP. This year will be an interesting one as I did not present a ton like I did during the last renewal period. This year I’m banking on the fact that community involvement predominantly via my blogging contributions will be enough, just like they were enough for me to get my initial award. Time will tell, many things in the program have changed since then so it’s just as likely this is my last year as an MVP. Either way, I’ll always be blogging and if it’s enough, it’s enough.

I’ll go a little more specific on the “reading” goal I often put in these resolution posts. Generically wishing to read more business content clearly wasn’t specific enough for me to actually do it. So, this year my aim will be to catch up on my CGA/CPA magazines. I had started catching up at one point a couple of years ago but I have no idea where I’ve left off. I’m quite certain I haven’t read one for over 5 years so this might be a bigger task than I realize! If I start with just the CPA side, I have 40 magazines to read from 2014 to 2017 if I were to go back to the beginning post-merger. Hmm… lol.

This one will be a bit more on the “fuzzy” side of the goal setting. It’s everything a goal shouldn’t be - it’s not specific, it’s not particularly measurable, etc. but it is on the list nonetheless.

The last quarter of the year was frustrating for me, and I learned that I need to pay more attention to my own mental health. A situation I’m not going to get into here took the wind out of my sails and to be honest, I’m only just now feeling like I’m coming back to being something resembling myself again. Around the same time, my dad had a heart attack and subsequent triple bypass heart surgery and while he’s well on his way to recovery, that was a scare during a time when I was already at a very low emotional point for other reasons. I think what saved me, as odd as it sounds, is taking time off to help my dad and his wife get into a new routine at home as it gave me some distance from the other frustration and gave me some very low key downtime. I spent a lot of time sleeping, a sure sign my body needed it. The fact that I didn’t bounce back right away, frustrating in its own right, told me I can’t ignore my emotions and mental health.

My dad’s medical issues and that of his wife’s earlier in the year were also a clear message that I need to get in better shape. Watching the difference in recovery in two people who had heart surgery, one in much better shape than the other, was a very clear indicator of what health and fitness means when you’re sick and recovering. It can mean the world of difference in how quickly you bounce back. So, among the things I’ve already started doing is watching more of what I eat, reducing my cola intake for example, and I do want to get more exercise and get back into better shape like I used to be. I spent too much of 2018 with my butt in a chair when I wasn’t at work and this year, that has to change.

This year also happens to be a milestone birthday year. Yes, I’m even looking forward to it. My partner and I have a big trip in mind, and have started planning that for this summer. I also hope to do something new and fun each month this year, whether it’s going to a new restaurant or experiencing a new adventure, I don’t know what exactly that will look like but that’s my plan.