I’m thrilled to announce that I’ve been renewed as a Microsoft MVP in Business Applications (Dynamics GP focussed) for the next year, through to July 1, 2020. 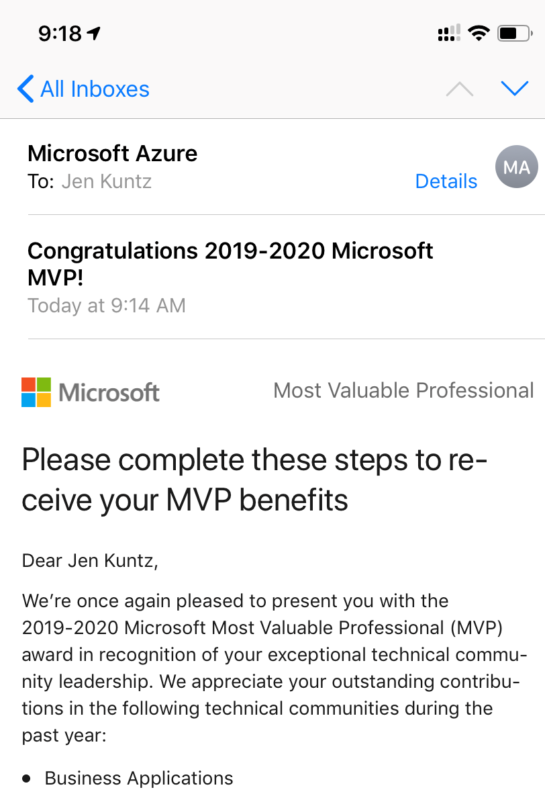 Renewal is never guaranteed and I don’t take it for granted that I will be renewed.

What is a Microsoft MVP?

During renewal this morning, I saw this wording on the Program Agreement we need to electronically sign. I don’t recall seeing this before and it’s a better way of describing it than I usually do on my own. It said:

The Microsoft MVP Award Program is a way for Microsoft to say “thank you” to independent technology community leaders who have demonstrated exemplary ongoing commitment to helping others get the most out of their experience with Microsoft technologies.

The MVP award is awarded to those technical community leaders who are not working for Microsoft - key point - we are not employees in any shape or form. We are rewarded with some exceptional benefits to assist us in continuing the work that we do - Office 365, MSDN subscriptions, Azure benefits etc. and that’s all “gravy” as far as I’m concerned.

Over the relatively short time I’ve been an MVP, I’ve had a chance to meet some exceptional folks, either other MVPs or program teams at Microsoft and with very few exceptions, every interaction is incredibly positive. The fact that I can email a product team to ask a question about a bug or issue with a product is simply amazing, there is no way I’d be able to do that even as a Microsoft partner, unless I was large enough to have earned that privilege.

The progression of Imposter Syndrome

I was first awarded in Oct 2016, when awards were done once per quarter throughout the year. Shortly after that was changed to monthly new awards and annual renewals, so I was grandfathered-in to a longer-than-1-year first award, and my first renewal (award #2) was on July 1, 2018. Today was award #3, but I’ve nearly been an MVP for 4 years. (I’m rounding up, I’m an accountant, I’m allowed LOL….)

I look back then and I think of how I feel today and there’s a definite progression of Imposter Syndrome I can see. The first time being awarded, I felt like an imposter amongst the rock stars the GP MVP group had at the time. Many of the other MVPs were friends but had been MVPs for so long it was intimidating to be counted among their ranks now.

Last year, after the second award and first time getting renewed, I remember commenting somewhere (possibly in one of my own blogs), about how I feel slightly more comfortable now. After 21 months in the program, I was starting to get it, understand how it all worked, and generally felt more comfortable in discussions with the other MVPs and product teams.

This year, I would say I’m feeling even better but the Imposter Syndrome is by no means gone. I still struggle with what I could speak about at a conference. I still question at times if I deserve the award. It’s a strange thing, this feeling, because I know I know my sh*t when it comes to Dynamics GP yet there’s that little part that causes you to question yourself.

I got here this past year by going back to what I feel I’m strongest at and best at delivering consistently: blogging and sharing my knowledge via writing articles. After getting renewed, that period until the first renewal was a blur. I felt I now had an obligation to go to more conferences to present and all these sorts of things that I put upon myself. Are the expectations there from the conferences who want their MVPs to come to their conferences? Absolutely, but most of the pressure is put on myself. Last year, by the time I was renewed, I was no longer self-employed, I was no longer in control of whether I went to conferences and my attitude changed. I’m back to self-employed now, but I don’t feel any differently than I did last year. I now feel more comfortable that I’ve found my sweet spot in the MVP “circus” (I say that lovingly!) and the past year of primarily sharing via writing has proven that it’s just as valid in the eyes of the team that votes for MVP renewals.

Perhaps now my mind will settle and accept the fact that I do belong and I don’t have to do what everyone else does. Some of my peers are great with video, some are fantastic on the forums, many present and are generous with their time at conferences and others are giving back with free technology and code. We all deliver our content and enthusiasm very differently and that’s ok (although it took me a while to get to realize that).

What’s up with the GP MVPs?

As of writing this (late morning on July 1st), it’s too soon to tell exactly who is renewed and who was not. I see several of my close pals have been and that’s great. As best as I can tell, we have lost at least one MVP but I will allow them the time to share that how they wish.

Many of the MVPs on the GP list have been actively working with other technologies within the broader Business Applications award category. It’s hard to tell precisely who is actually awarded for Dynamics GP specifically although I’m attempting to find out. This category contains such a mix of things, and many of us touch mulitple areas so few of us are pure GP these days anyway!