I have had the Surface Go for just over 1 week now. I had been interested in it since it came out and did a lot of research on my recent trip to Fargo comparing US prices vs. CAD prices and comparing the “unique” build configuration that Costco was selling vs. what everyone else had.

The basic options and pricing I compared were:

** For reference to “savings”, the US and CAD pricing I use is the advertised retail price but the “savings” I refer to is incorporating sales tax and exchange rates into the mix. I was in Fargo, ND where sales tax was 7.5%. At the time of my trip, my credit card expenses were coming in around $1.35 FX rate (CAD $ needed to purchase $1 USD). (Ya, it sucks)

To have a perfect apples to apples comparison, I was comparing buying a Surface Go in that specific location, including paying local sales tax, and then converting that to CAD, vs. buying it at home in CAD with my local (Ontario) HST rate of 13%.

I could have compared to some “no tax” states but since I neither live near one nor was able to get to one, it wasn’t relevant to my decision.

One other note: I didn’t factor in duty or taxes on bringing the Surface Go back into Canada because I would have been bringing it in after a 7 day trip out of country, thus the purchase would have been within my personal exemption limit. That’s a big factor if you properly declare your purchases over your exemption at the border as you’re going to be paying at least the HST on that purchase if not duties, depending on the item.

Side note: I’m elaborating on the tax and exchange rate stuff because I often hear friends & colleagues talk about things being so much less expensive in the US for this or that. Often they are not taking sales tax into consideration in the price comparison, or they are underestimating how bad the FX rate is these days (or both!).

Many people aren’t aware that Costco has a unique configuration. I still think that is a pretty sweet deal - best of breed including a type cover, I just didn’t want to wait for it. I ended up visiting a Microsoft store in Toronto to buy one, opting for the top-end model (8gb RAM, 128gb SSD). I also picked up the “bundle” of Surface Type Cover, Pen, Warranty and 1 year subscription for O365 Personal. Good deal for sure, way less expensive then buying those individually, but ended up spending far more than what I was going to spend if I had gone to Costco.

Here are some of the things specific to this item that were the selling points for me, even though I could have purchased some other things for less money.

I’m looking forward to watching games or videos with a proper self-supported tablet! While this was a creative use of a butternut squash, once the veg was eaten, it was back to the “propping an iPad” drawing board. LOL…

I’m often watching MVP PGIs while I cook or eat dinner, and this device will be perfect for that. I don’t like bulky cases for iPads, even though one of the major benefits are kickstand-like functionality. I love that the Surface devices have this built-in, it’s a major bonus to me. 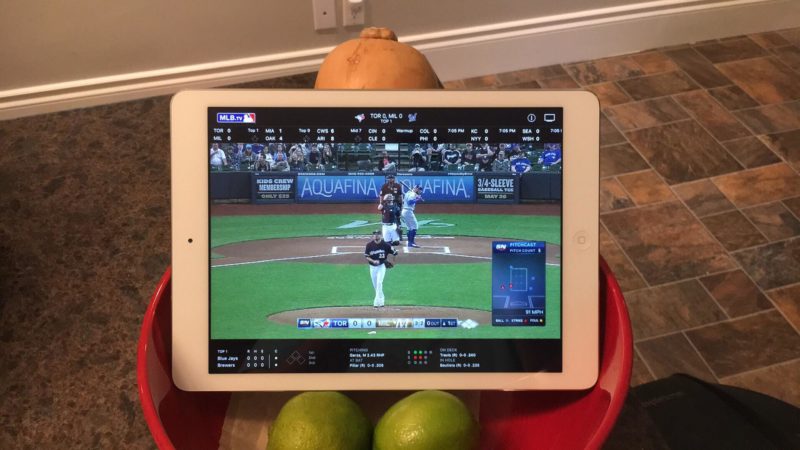 I toted this around in an MEC sling bag half the week, it’s that tiny. I also have an iPad mini, which will continue to serve a purpose, one of them though won’t be a machine I expect to be capable of remoting into the office in a pinch. Sure, I could pair the iPad with a keyboard but that becomes clunky to travel with. This is compact and I could carry it with me everywhere with little need to worry about the space it takes up. I can do real work on it that I don’t feel I could do as easily on my iPad, even if I had a full size or Pro model.

Keyboard + Cover in one

I wasn’t sure I’d like the keyboard but I’ve typed out this entire post with it and it’s getting more comfortable all the time. Yes, the keyboard is slightly more condensed due to the size of the Surface Go footprint but I am finding it’s surprisingly pleasant to type on the type cover. It’s a bonus to me that it doubles as a cover. As I said above, I am not a fan of bulky boxes and covers that offer similar functionality. This is trim, keeps the footprint small, and it works.

I’m a Windows gal. I love my iPhone and iPad, but I have zero interest in a Mac for my full computer experiences. I wanted a portable machine that operates the same O/S as my regular laptop and work machines do, period.

That brings me to “S” mode. This comes with Windows S mode, which I tried for a little while but what killed it for me was not being able to download Firefox. Of all things, a browser stopped me from continuing with S mode. I really wanted to give it a chance but the reality is, there are enough sites that simply don’t seem to work properly in Edge, I don’t want to use IE either and that meant getting out of S mode to have complete control over what I install.

In case you’re unfamiliar with S mode, technically it’s Windows Home under the covers but it (apparently) has some Windows Pro functionality that Windows Home doesn’t. I didn’t dig into that and now that I’m writing this, I can’t find the post where that was outlined. If I find it I will update this post.

For certain scenarios, S mode would be completely fine, and preferable for the simplicity of controlling the ways applications can be installed as well as limiting the options. I for one prefer to manage that myself so, within the first couple of days I switched out of S mode and put in a key I have for Windows 10 Pro. I’m now connected to my Office 365 Azure AD account just like my other laptop is.

I love it so far but really haven’t used it a ton. I will be using it a lot more this week while I am at a mini-conference, using it for note-taking.

The first morning I had it, someone from the office needed something so I used it to remote to my desktop at work and get the info he needed. Easy peasy. In a pinch, it’s fine, but once again, I wouldn’t be using this as a “work from home” device, I have a bigger, faster laptop to do that + a dual monitor setup for actual work.

I brought it with me one night to dinner and had it propped up on the table while I ate. I was able to do a little email catch up and ended up bringing up the Libby app to continue reading the library book I had started on my iPad. Love it!

Travel with this should be a no brainer. The only times where I may also need my full laptop would be if I am presenting any Dynamics GP content. I don’t plan on installing SQL and GP on this, although it could probably handle it for minor demo situations.

Working with this should be interesting and that’s ultimately where I hope this will be useful. I’d like to get away from paper notebooks and get more of my daily notes into OneNote. I also never take my work-issued laptop with me anywhere, as it’s big and heavy and not what I would consider portable. I hope to use this in meetings at our other offices where I can take notes in my OneNote notebooks (thanks to Office 365) and rely less on paper. I can pull up documents in OneDrive to refer to in meetings easily and stay in touch with email on the road.

Overall, I like it so far, and it has a lot of promise. I had purchased a Surface Pro 4 when they first came out and I ended up returning it 3 days after I purchased it. The O/S was flaky, kept needing me to reset to factory default and I gave up. I was really hoping this experience was different and so far so good.