Today was day 3 at the Dynamics GP Tech Conference. As in other years, the 3rd day is a half day and many people head on their way back home right after the conference is done. For me, it’s a bonus part of a day off to regroup, review notes, check in on email etc. and get ready for 2 more days of training. I’m going to be taking the eOne Solutions SmartConnect bootcamp Thursday and Friday.

Session 1 - eConnect Nodes: what do they do?

The first session of the day for me was delivered by Steve Gray, of 4penny.net and DynDeveloper. The content was around eConnect, as the title says, and some finer details of how they work to understand them better. He showed his techniques around building a wrapper stored proc around calling an eConnect object to make it simpler for calling it. For example, only exposing the parameters that are needed for your purposes instead of the default that has dozens of parameters.

He showed some examples using RM Transaction Entry as a simple example that requires minimal code to demonstrate. The 4Penny.net link above is to a place on his site where he shared his GP Tech materials.

The best tip I took out of this session is to consider using the SSRS stored procedures that are for all of the GP out of the box reports, and use them to all users to have reports like HATB’s in Excel. So simple several of us thought “why didn’t we think of that”? Using a wrapper stored proc like he demonstrated on the eConnect side of things to minimize the # of parameters and then use it in Excel to create a parameterized report. I’ll aim to do one and test it to blog about that at some point.

This session was led by John Lowther. It was more of a discussion session than a presentation and certainly has a lot of good discussion! The primary two topics discussed were pros and cons of commenting code, header vs. inline comments, and source control.

As one of two non-developers in the room, it was interesting to listen to the discussions and opinions on how much commenting is sufficient. The general sense was comments in the header were important but the opinions varied widely on the use and extent of inline comments within the code. What I found most interesting is the reasoning behind many of those who preferred not to comment inline much (and document elsewhere) was the concern that it won’t be maintained when there are changes. To me this seemed kind of backwards (and I said as much). It would seem to me (again, as a non-developer), there should be some rigour to the processes and expectations that if you change code, you update the comments and/or documentation per your procedures. Not doing this because “the next guy might not update the comments” seems like flawed reasoning! Or the other reason, that sometimes the changes are urgent and you do them so quickly that documentation is the first to go. I’ll stand by my comment above, processes are there for a reason whether that is financial processes or development processes. The results of either are better when there are controls to ensure things are done the way they are expected to be done.

What did come out of this was a realization that perhaps a source control session for “citizen developer” audiences might be a good session idea for next year. For someone like me who over the years has written tons of SQL views at client sites, and didn’t have a development “team” when I worked at a VAR, there was no process in place or training for source control, even for these “light development” scenarios. I know what source control is but I don’t know how to use the tools, the best way to organize and manage, nor an idea of what a good process is (check-in, review, etc.). For that middle layer of non-developers it would be a great session to sit in on!

The last session of the day was also by John Lowther. This one was going through the various settings in SQL Server and discussing which areas of configuration you really want to ensure are set a certain way, or what the best practise may be for a given area (like the max RAM setting for instance).

Wrap-up on the conference itself

This was another enjoyable GP Tech conference. It’s the one conference I would like to attend every year, as long as Bob and the organizers will allow me to attend that is (and my boss of course!). I get a lot of value out of this, not all of which I can put into practice immediately but it helps me plan for what to learn next and where to focus on. However, as this is a partner conference, an exception has to be made. I wasn’t the only customer there this year, there were at least 3 of us, based on conversations I had.

Some thoughts, in no particular order:

After arriving back at the hotel, some of us went out for lunch nearby. We had an interesting discussion at one point during lunch about healthcare, Canada vs. US. I don’t even remember how we came upon that topic. Anyway, more on that in a bit.

After lunch, I had laundry to do as I didn’t want to pack for 8 days. A bunch of us hung out in the lounge area on the main floor and I did as well in between loads of laundry. Everyone was semi-immersed in their laptops doing work and talking about the conference and sessions we liked.

The healthcare conversation came back up at one point because Shawn (Dorward) joined us and we got into discussions on how his son was doing and the earlier discussions made their way back into place. It was interesting. I have to say that on both sides of the discussion, minds were blown about how the other side works. For me the “wow” things were hospital charges (basically $100 to walk in the door and something else like $1,200 maybe if you are put in a room, no matter if you’re there for 5 minutes, etc.), and then $4,000 to have a baby delivery! OMG.

For my side, it was funny the questions back to me, as it was just as odd to them what I was telling them as what they had told me. They were mostly stunned that I can go to the doctor or to a hospital and not pay for it (directly). Yes, we all pay for this via taxes, but you are not cared for based on your financial status or means. Basic health costs are covered.

So, here’s some basic info for my province, Ontario, that my American friends might find interesting. 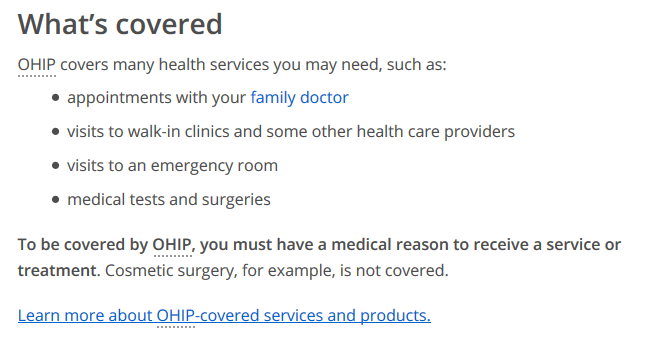 Supplemental health insurance is provided by many employers at various costs to the employee. I would say most employers that offer benefits pay for them fully and others may split the costs with the employees but even those costs are minimal for most. Mine is fully employer paid and the cost of my coverage (single person) is something like $162 a month for the plan & coverage my employer has, others would vary. Family coverage would obviously be higher, but it’s a flat rate for “Family” no matter how many dependents. “Heath Insurance” for the most part would typically cover things like those listed on the not-covered list (dental, eyeglasses and contacts, paramedical treatments (massage, chiro, physio, etc. types of services although some physio can be covered under OHIP under certain circumstances), and private or semi-private room costs in a hospital to name a few things. Like I said, it was a fascinating discussion…

That’s it for this conference. I will have another post by the end of the week with a follow up on a promotion that David Musgrave and potentially other ISVs in our community are offering up as a way to get more donations to Shawn’s son’s medical costs. More to follow, I’m waiting for David to confirm the details and post his side so I can share the link.

If you missed my earlier posts, day 1 is here, and day 2 is here. My wrap-up post is here.