GPUG Summit is done for another year and this is my final post on the conference, getting home and some thoughts. I’m writing this post a day after getting home since the getting home part was a long day! In case you missed my earlier daily GPUG Summit posts, here they are:

My trip home was mostly uneventful, except for a chance meeting with a celebrity, and a near asthma attack. :)

My flight from Nashville to Atlanta was just fine. However, I didn’t notice that I had less than an hour from arrival to the flight time of the flight home. As we landed, my Delta app indicated that my next flight was boarding a couple of minutes later. Hmm… and Atlanta is not a small airport!

I was glad I was in row 2 because I was out of the plane super quick. I ran as fast as I could from one end of whatever terminal I was into the train/tram and transferred 3 terminals over to where my next flight was.

I’m out of shape and used to have asthma. Every time I try to full out run like that, I end up in a coughing fit for anywhere from 30-60 minutes afterwards while my lungs recover, even if I’ve long since caught my breath. I’ve always assumed that is a side-effect of having had asthma in the past, who knows.

Anyway, I made it just in time to board my flight but I was coughing a lot and when I sat down in my window seat, the guy on the other side of the aisle and my aisle seat-mate were just looking at me to make sure I was OK. The other aisle guy turned out to be John Slattery, who played Roger Sterling on Mad Men! So cool. I recognized him right away but couldn’t remember his real name, so started checking his IMDB profile to make sure I had the right guy. Of course, at this point, all I could really focus on was drinking as much water as I could to calm down the coughing… so irritating, for me and those around me!

I’m one of those people who recognize no one, has never had a close encounter with anyone famous or if I have, I’ve been completely oblivious to it. I mean, on the flight to Nashville, I’m pretty sure (now) that I was 3 feet away from Keith Urban but didn’t recognize him. I’m definitely not a shrieking fan-girl! So, in this case, I also wasn’t 100% sure it was him and I was trying to work out how to not make a fool of myself but ask him his name when we got off the plane.

Long-ish story short, as we started to descend into Toronto, I glanced his way and he was reading a manuscript that has “John Slattery” watermarked over the entire thing. Clearly, the manuscripts are printed per person, who knew? So, there is the confirmation that it’s really him.

The process of leaving an international flight in Toronto has you walking a long way from the plane to the customs area and this was no different. On the way up the escalator, I waited for him to catch up to me and asked him if I could take my picture with him, explaining that I loved his character on Mad Men. He said sure, but he did have a ball cap on when he got off the plane, which I assumed was to keep a low profile. I asked him what brought him to Toronto and we talked the entire walk through to customs, probably a 10-minute conversation. He was telling me about a new project from the people who did Mad Men, called The Romanoffs, and a bit about that, and that one of his Mad Men co-stars, Christina Hendricks, also has a role in the show. Love her character too. It was a pretty cool moment just to have a relatively extended conversation with someone you watch on TV. What was very fortunate was the place was empty; we were both in first class and therefore leaving the plane close to the front and no other planes must have landed recently. We quite literally were walking alone down the laneways to customs all by ourselves, no chance of anyone else recognizing him and getting interrupted. How likely is that??!! 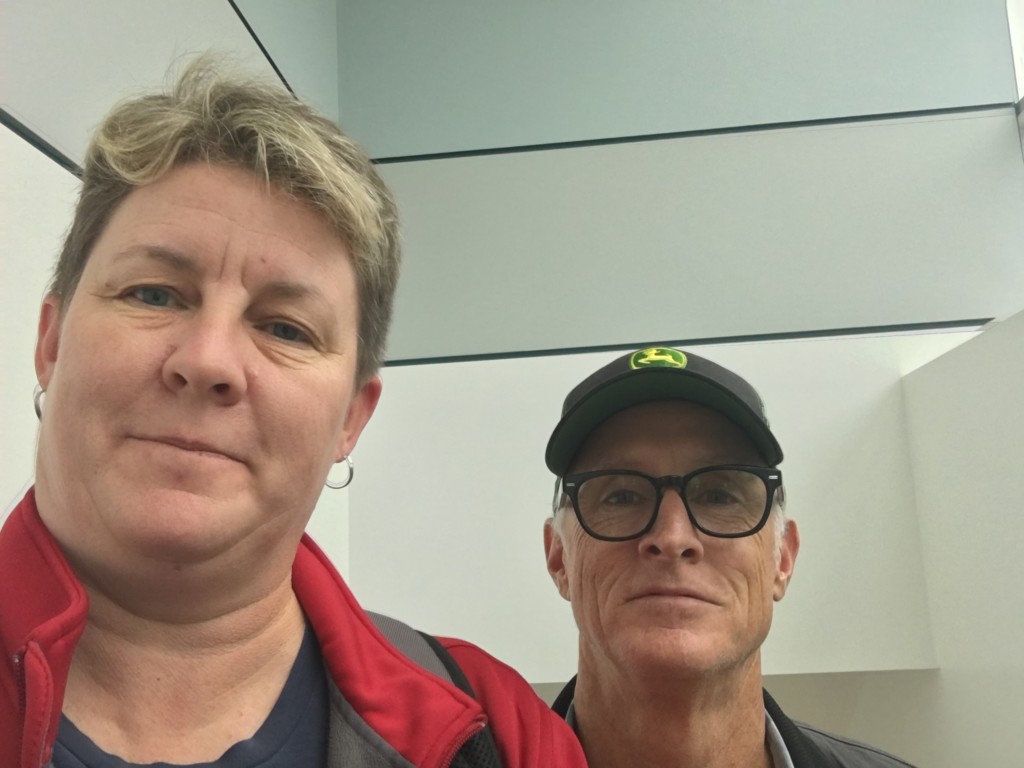 Oh, and by the way, he is even better looking in person than he is on TV. :)

Dinner with my Mom and Sister

Yesterday happened to be my mom’s birthday and I had planned to take her out for dinner after landing while I was still in Toronto. I forgot how much traffic sucks in Toronto! As I crawled along the Allen Expressway, I had to laugh at the excellent product placement the TTC (Toronto Transit Commission) uses for their ads. Well done! It took me 2 hours from landing to getting to her place in mid-town Toronto! Sheesh!

I finally actually got home around 9:15 pm Saturday night, after a long day of travel and visiting my mom and dinner with her and my sister. I was totally zonked and fell asleep by 10 pm, and didn’t move again ’til nearly 8:30 am this morning, it was awesome! (But I still feel tired!)

People I met for the first time

At every conference, I get an opportunity to meet some of the people I follow or who follow me on Twitter for the first time. This year, I counted several more people I met that I’ve corresponded with on Twitter over the years or just know of/about from the various GPUG forums. I know I’m missing some people that I met, I apologize for that, but here are the folks from Twitter that I ran into and met (and their Twitter profiles if you want to check them out and follow them too!):

My last thoughts on the conference are really just a big thank you to all of the people that make it happen, including DCI of course (Dynamics Communities), the volunteers on the planning committees and the many presenters who put so much time in finalizing their presentations!

I loved the organization around the food this time around. They just seemed to have that down to a fine science, at least based on the times I was there to eat. Imagine a gigantic room for 6,600 people to eat in, and a “receiving line” of staff shuttling everyone down a line to specific areas to get food. No one area was getting too overloaded. I never waited more than 2 minutes to get food. Many other conferences I’ve been at, I’ve waited in long lines to get something to eat. I also loved that there was never a shortage of (hot) tea and milk, which my caffeine-addicted brain appreciated!

The other good thing I wanted to acknowledge was that the room temperatures were pretty good this time around as well. I often find some rooms super hot and others super cold but this time, with one exception, any room I was in was fine (or good enough). I didn’t once have to bring or wear a jacket or long sleeves.

With that, the conference is done and my only job now is to log back in and complete my session surveys. If you attended and are reading this far, please fill out your surveys for the sessions you attend as well as the overall. Feedback is the only way things improve or change!